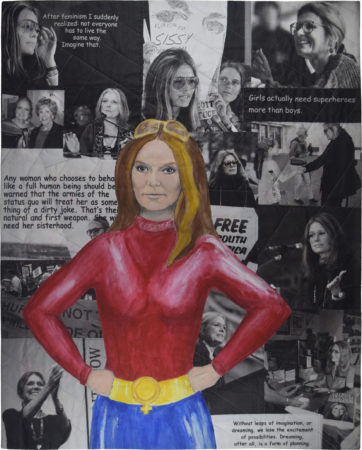 No one has worked harder for women’s rights than Gloria Steinem. She is the iconic face of the second wave of feminism that began in the late sixties and early seventies and she is recognized and honored worldwide.

I became interested in the struggle for women’s rights when the Florida Legislature voted against passage of the Equal Rights Amendment even though my own brother, a legislator, spoke for its passage on the floor of the House. It was around that time that I first became aware of Gloria Steinem, the woman who would prove to be a great and tireless leader of the women’s movement. I have been working for the women’s movement ever since.

I often combine my love of art with my intent for the world: equality for all. Since my art is always autobiographical in some way, it is fitting for me to express my admiration for a true leader in the area in which I have spent so much time. This piece even includes a photo of me with Gloria.

In GLORIA I explore and evoke feminine power, sisterhood, and connection. Gloria, like me, grew up reading comic books about Wonder Woman and she has written on the subject of how Wonder Woman is a role model for girls. Gloria is a role model for me. My aim was to produce a “poster” of familiar photos of Gloria throughout her career and an image of her as the superhero she is.

The National Press Club was founded in 1908. In 1972, Gloria Steinem, a journalist, was the first woman to address the club, just one of her many accomplishments.

Photographs and quotes were printed on cotton and raw edge pieced to form a background poster. Then a painted image of Gloria as a superhero was appliquéd on to the poster.