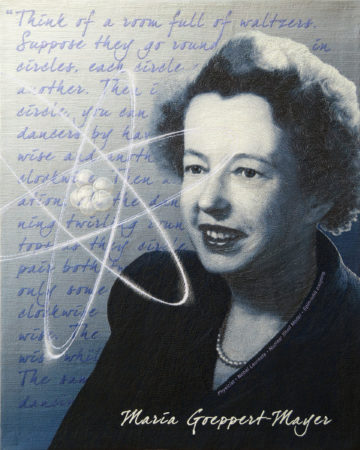 Maria Goeppert-Mayer, a theoretical physicist, won the Nobel Prize in 1963 for the shell model of the atomic nucleus. This piece shows her staring into the heart of a nucleus, contemplating how the spins of nucleons (protons and neutrons) and their orbits are coupled. As she described it,

I became enchanted with the elegance of Goeppert-Mayer’s theory as an undergraduate. Today I admire the fact that she persevered despite battling years of sexism in a profession dominated by men. In both her generation and my own, studying physics often meant being the only woman in one’s classes and in one’s workplace. While rewarding, it could also be tremendously isolating and discouraging. Goeppert-Mayer is still the only woman other than Marie Curie to be awarded a physics Nobel.

Maria Goeppert-Mayer, a theoretical physicist, won the Nobel Prize in 1963 for the shell model of the atomic nucleus.

Typography and images were composited in Photoshop. The resulting image was printed on cotton fabric, batted, and stitched.