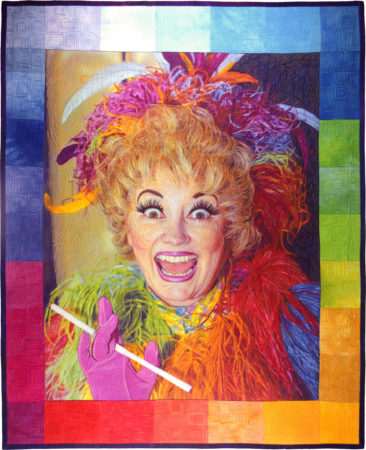 Humor Has It: Phyllis Diller

My idol in the early pre-teens was and still is Phyllis Diller, a courageous stand-up performer that brought not only laughter within the family room but opportunity to see history in the making of the first successful female stand up comedienne televised by the new color TV in the 1960s and 70s. Ms Diller not only created rolls of laughter with one-liners, her wardrobe was cutting edge fashion do’s and don’ts. Her contemporary wardrobe style with delicious color choices, orange next to purple, not only appealed to my personal pallet in creating art but influenced the idea that it really can work.

Some of her famous funny one-liners may have run over my head but were relevant to relationships and everyday lifestyles. The inquisitive aspect of “Fang” the so called husband or has-been was genius. Her one-liners made fun of her own body image with many likes and dislikes and the most edgy of all, the acknowledgement she had surgical facelifts. The admittance in such a public forum was a first of its kind.

Ms Diller always had a genuine cracky laughter after each one-liner that was recognizable and contagious. One inquisitive visual aid was her infamous cigarette holder but no smoke came out. With much anticipation we could not wait to see her stand-up on stage and sometimes next to the best of men comedians within her generation.

Phyllis Diller was the first female in stand-up comedy and opened career paths for the women comediennes of today.