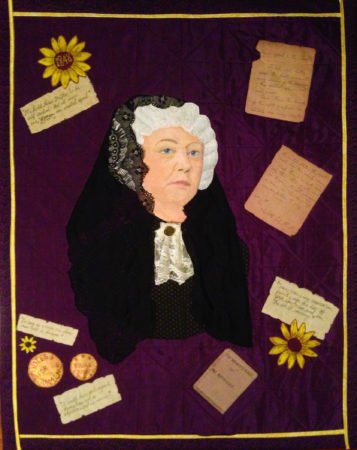 When you think of the women’s rights movement, who comes to mind? Most people think of Susan B Anthony, but in my opinion, Elizabeth Cady Stanton revolutionized the movement for women’s rights although she did not receive as much recognition as Anthony. That is why I chose to honor Elizabeth.

In my quilt, I included sunflowers because Elizabeth wrote under the pseudonym “Sunflower” and also because the sunflower became a symbol of the suffrage cause. Most people thought of Elizabeth as a serious person, but in actuality, she had a sense of humor that can be shown through a couple of quotes and a letter to Theodore Roosevelt on the quilt. The bible at the bottom is The Woman’s Bible that Stanton and her daughter wrote. I choose to use the colors purple and yellow because those colors were representational to the suffragists that fought for women’s rights.

I believe Elizabeth Cady Stanton was a woman before her time. Although she passed away before women won the right to vote, she inspired many women’s rights activists and her descendants are active in today’s fight for equality.