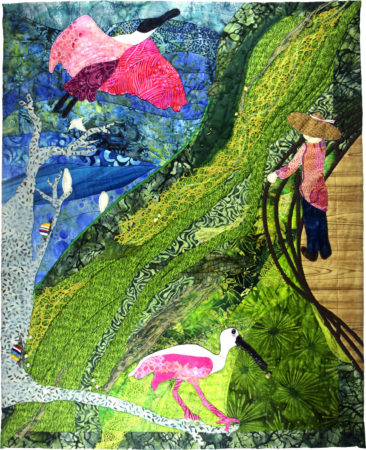 HERstory! What an exciting idea for a quilt project! When I first started thinking about who I admired enough to want to make a quilt about, I had a million names go through my head. A lot of them were authors because I feel the power of the written word so strongly. But she needed to also be someone who used those words for a greater purpose. Marjorie Stoneman Douglas was such a woman.

Douglas was a journalist, writer, feminist and environmentalist. She was an active, outspoken environmentalist and champion of human rights, right up until her death at the age of 108. She wrote the book “River of Grass” in 1947 which led to the eventual protection of the Everglades by the federal government.

Oh, how the imagery popped into my head. I could see and feel this River of Grass coming together under my hands. What wonderful inspiration! I started by piecing the flow of grass and water and then built upon that foundation. I’ve tried to tuck representative bits and pieces of fiber and beads into the quilt to suggest the rich assortment of plant and animal life dependent upon this environment. Marjorie looks over the scene from one of the many walkways erected to appreciate this now protected parkland, as she did in her long, rich life.

Marjorie Stoneman Douglas saved the Everglades and was a staunch environmentalist.