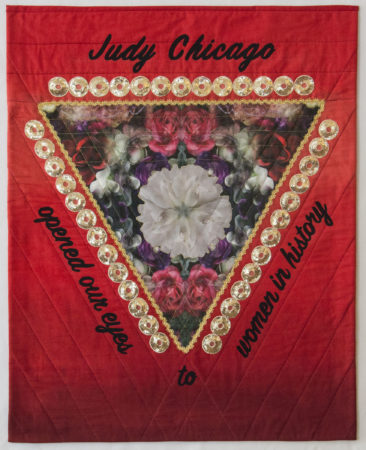 I was inspired to create this piece because of a long-held admiration for Judy Chicago’s work as a Feminist artist and as the creator of The Dinner Party (1974-1979). I had read her book, “Through The Flower: my struggle as a woman artist” in the late 1970s. When I learned The Dinner Party was on display in Cleveland in 1981 my friend Lenore and I traveled there to see it. We were in awe as we entered the building and read the descriptive panels leading to the large hall where the spotlighted triangular table was on display. All in attendance quietly admired each of the 39 individualized elaborate cloth runners and china-painted porcelain plates set around the table. The experience truly opened my eyes to women in history and led me to pursue the study of art and women artists. I recently saw The Dinner Party on display at the Brooklyn Museum, its permanent home. My awe upon seeing it again had not diminished, but rather had increased in those 35 years!

The triangle in this piece represents the table with 13 “plates” on each side. The flowers on the table are a tribute to her first book. The center flower represents the plates of the women at The Dinner Party and all women in history, today and in future generations.

Judy Chicago, a pioneer in Feminist art and art education, created “The Dinner Party” (1974-1979) a ground-breaking tribute to the under recognized achievements of women in history.