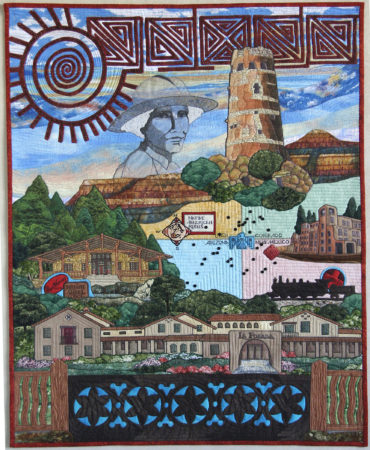 Mary Colter: Builder on the Desert

I first became aware of Mary Colter in a formal way when I purchased the biography Mary Colter, Architect of the Southwest by Arnold Berke. As an Arizona resident, I had visited the Grand Canyon more than once, and La Fonda hotel in Santa Fe, New Mexico was already one of my favorite places. As I learned more about her, I was captivated by the way she hadn’t just built interesting buildings, but had fit them into their settings so perfectly that she inspired a whole new style of architecture.

So her “portrait” had to be about her work, not her face, because it is her work that is her lasting, exceptional legacy. I took a road trip up through northern Arizona to photograph the Watchtower at the Grand Canyon, and La Posada Hotel in Winslow, along I-40. Along the way I stopped at quilt shops, took photos, and was amazed at her wonderful structures. I loved learning about her thought process, and the care she took giving each unique structure its own story to tell.

I chose four buildings that show the breadth of her work in the southwest: the Watchtower and Bright Angel Lodge at the Grand Canyon, La Posada Hotel in Winslow, and La Fonda Hotel in Santa Fe, where she designed the interiors.

Her face is near the top, ghostlike among the clouds of a bright southwestern sky.