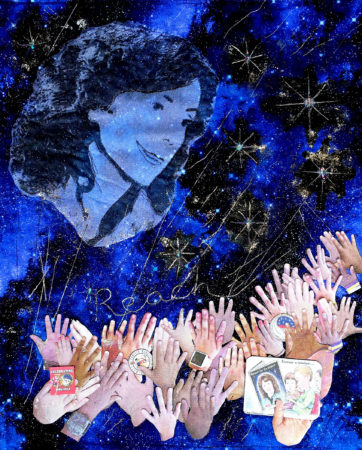 “Ms. Foell, LOOK! Something’s wrong. It doesn’t look like it always does.” Haunting words for me even now, 30 years later, as my students and I watched Space Shuttle Challenger explode from our classroom window. Living on the “Space Coast” made the decision easy to honor Christa McAuliffe, first teacher in space, for my HERstory quilt. Achieving what I felt is an honorable tribute has proven much more difficult.

“Reach For The Stars” was Christa’s mantra–to inspire her students to dream and achieve. In my quilt, “Reaching for Dreams”, I wanted to show that three decades later, her legacy lives on. I photographed hands of students at Christa McAuliffe’s namesake school in Palm Bay, FL and printed them and the school’s logos on a special paper fabric called Kraft Tex, which allows the hands to have vitality and dimension as they reach. Christa’s spirit looks on with love and admiration, still teaching as depicted in Dave Granlund’s editorial cartoon. Dave knew Christa and had himself applied to be the first journalist in space. His artwork shows what I believe–that she is still a teacher. I know she was watching how eager those students were to be a part of my project.

In 73 seconds of too cold temperatures that fateful morning, 7 astronauts lost their lives because of a .25 inch o-ring failure. It was fitting to me to include a tribute to all of them in the 7 stars that are accented with specific pieces of dichroic glass, a widely used artist’s fusing glass created as a spin-off from the space industry.

At the conclusion of the HERstory project, it will permanently hang in the school’s administration office.

Christa McAuliffe had a guiding principle: “I touch the future. I teach.” This ordinary woman who continues to touch immeasurable lives was the first teacher in space. Although her life ended tragically in the Challenger explosion, her dreams and influences live on.