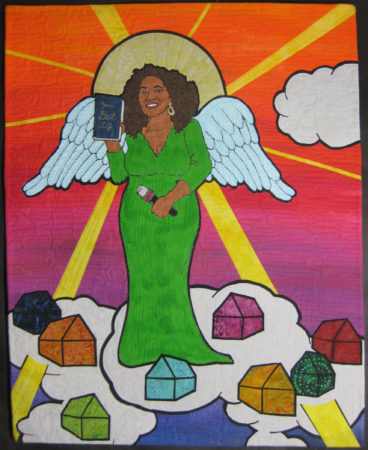 An Angel Among Us: Oprah Winfrey

They say there are angels among us, and I believe this to be true. One such angel on Earth would have to be Oprah Winfrey. She has attained an enormous amount of fame, followers and wealth as a result of her hard work and drive, but it is what she has done for others that makes her worthy of being honored in this quilt.

I have depicted her as an angel, complete with wings, heavenly skies and houses from her Angel Lane. Her sunny halo is reminiscent of what might be seen in a Renaissance painting from the late 15th century. The halo, in those times symbolized a godly or enlightened person, but also is symbolic of the light of grace bestowed by God. She is dressed in green, the color of prosperity, growth and renewal, and she holds two familiar items: a microphone and a book, which I entitled Your Best Life. The golden rays from the sun radiate from her like her spirit, and touches the world.

Oprah Winfrey, the most influential woman of her generation, is a media mogul, philanthropist, actress, and advocate for education, women and children.