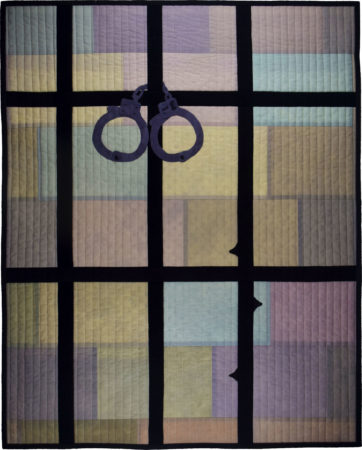 Lucy Burns was a women’s rights activist. She worked tirelessly for the cause she believed in. She and her friend Alice Paul were two of the more militant suffragettes. Lucy has the distinction of the suffragette that spent the most nights in jail.

In November of 1917 Lucy and many others that were picketing in front of Woodrow Wilson’s Whitehouse, were jailed at the Occoquan Workhouse. During the night of November 14, 1917, forty plus guards with night sticks attacked the women to “teach them a lesson.” Because she was identified as “The Ring Leader,” Lucy’s attack was extremely brutal. She was stripped bare and her hands were manacled to the bars above her head where she remained in the cold all night. This night was referred to as “The Night of Terror.”

I often use thorns in my work to represent pain and suffering. There is a desolation of a garden gone to briars and weeds. Thorns are rather prickly, as is this tale.