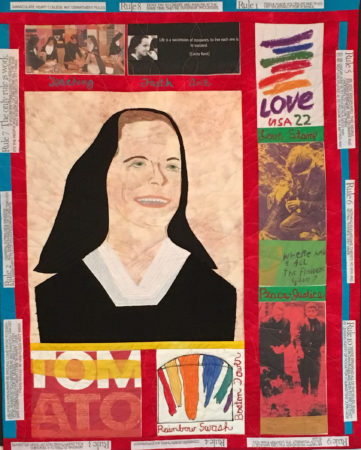 Sister Corita Kent was a brilliant Pop artist and a renowned art teacher but it was her anti-war work and advocacy for social justice that first brought her to my attention during the sixties.

Under her direction, the Art Department at Immaculate Heart College flourished and became known for its innovations.

Sr. Corita incorporated her beliefs into her own art in a playful and accessible manner, adopting silk-screening methods, to increase production and lower costs.

I took my cues for making my quilt from Corita herself. I stuck to primary and secondary colors and added words, orienting them in different directions, so as to draw in the viewer.

I included the Rules for Work in such a way that they invite the viewer to take a closer look.

Corita boldly put herself AND her work on the line in order to advocate for her causes, embracing Vatican 2 and reform. However, she and her Religious Sisters were met with resistance in a very conservative diocese.

After leaving the order she continued to support peace and justice through her art.

Corita Kent designed the iconic LOVE stamp in 1985; over 700 million were sold. She also designed Rainbow Swash, a boldly painted 150 foot high Gas Tank in Boston, MA. This is the world’s largest copyrighted work of art.

Corita’s work hangs today in some of the world’s most prestigious museums.

On December 1, 2016, Corita Kent “distinguished artist and social justice advocate” was inducted into the California Hall of Fame, honoring innovators.

As a Religious and Woman in the sixties, Corita Kent put her work and herself on the line to spread her message of peace. Her innovations in teaching and art are at last being recognized.