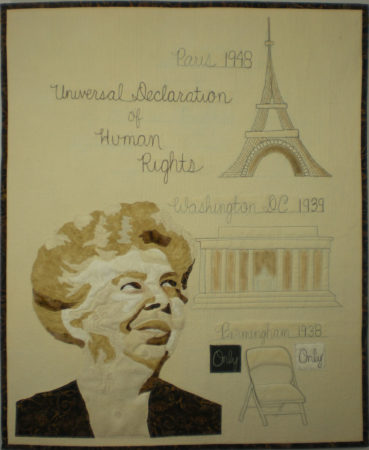 It was incredibly hard to decide just what to use as my focus for this quilt. There are so many chapters to the life of Eleanor Roosevelt, so many events, so many accomplishments. Eventually I decided to go with what she considered HER greatest accomplishment, The Universal Declaration of Human Rights, adopted by the United Nations in Paris, 1948.

There were also two related events that I wanted to portray, the segregated Birmingham Courthouse of 1938, and the concert by Contralto Marian Anderson on the steps of the Lincoln Memorial in 1939. Once that was established, then the challenge became, how? Abstract was not the way to go with this one. It had to be a portrait and it had to be simple.

Because the events in Birmingham and Washington, DC were about color, it made sense to use very little to portray them. Also because the Universal Declaration of Human Rights was about basic rights, color became meaningless. Sepia tones resonated and worked. The public domain image of Mrs. Roosevelt that I used was found in the FDR Library photo archives.

As Chair-person of the UN Commission on Human Rights, Mrs. Roosevelt co-wrote the Universal Declaration of Human Rights. This she considered her greatest accomplishment.