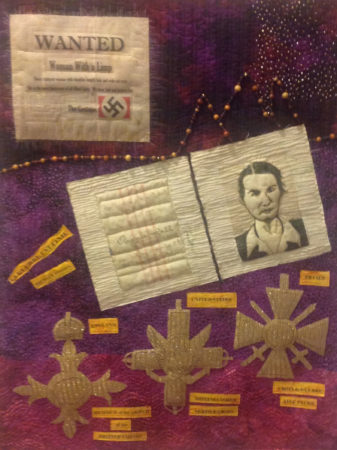 Just like Ginger Rogers and the whole backwards and in heels quote, Virginia Hall was the 007 of WWII with a wooden leg. If anyone wanted a real life block buster movie, Virginia Hall’s life would provide it! From the tragedy of losing her leg in her twenties through a gun accident, to surviving bomb raids, to training to become a spy and escaping France on foot over the Pyrenees – her life would be an action packed thriller of selfless heroism.

Virginia, turned down for a Foreign Service appointment went on to become a very successful ambulance driver and later spy. She entered enemy territory undercover twice, developing a resistance network. Their tasks included meeting in the woods to obtain vital air drop supplies, helping captured soldiers in hiding escape, and the most dangerous, she transmitted intelligence to the Allies to help win the war on the radio. After years in occupied France, the risk of discovery as the woman the Gestapo named “The Limpy Lady” became too great, she escaped in a group with a scout traversing 30 miles over the Pyrenees Mountains on foot.

Upon the end of the war, she was recognized with awards from various Nations –

The Gestapo’s most wanted female spy of WWII, Virginia Hall, an amputee, successfully fooled the Nazi’s to save lives, independently built an intelligence network, and obtain and transmit intelligence.