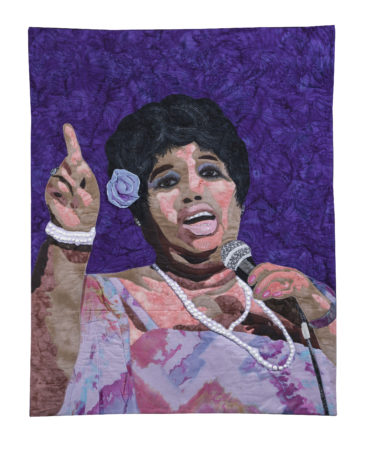 I still remember when I first heard the music of Aretha Franklin. She is the reason I love Gospel Music to this day.

In the 1970s Aretha recorded her album “Amazing Grace.” It sold more than two million copies making it the best selling gospel album of all time. She dominated the Top Ten Charts and soon earned the title of “Queen of Soul.”

In 1987 Aretha was the first female to be inducted into the Rock and Roll Hall of Fame. She received the Grammy Lifetime Achievement Award and Kennedy Center Honors in 1994. In 2005 Aretha was awarded the Presidential Medal of Freedom Award and was the second woman ever to be inducted into the UK Music Hall of Fame. She was awarded her eighteenth Grammy in 2008 that made her one of the most honored artists in Grammy history.

Aretha Franklin’s music has moved millions of people through the years. When I am listening to her soulful sound, I am reminded of a beautiful Black woman rising up bringing us to a peaceful place.

The “Queen of Soul” Aretha Franklin was the first female artist to be inducted into the Rock and Roll Hall of Fame.

I found a photo of Aretha on public domain, I took it to a professional photographer and had it blown up to the size required by this show, 24X30. I also had them posterize it, which shows me the color and value changes. I traced these changes onto muslin and also on a clear plastic to use as a pattern. After placing the pieces onto the muslin I quilted and faced my quilt.

I used 100% cotton fabric for her face, hands arms and neck. Her dress is a nylon fabric to give the sheer illusion. The thread was cotton and nylon. The beads on Aretha’s necklace were done with puff paint. I also used crystals for her earrings and ring. The rose in her hair is made from silk wire ribbon. I painted her eyes with acrylic paints and thread.