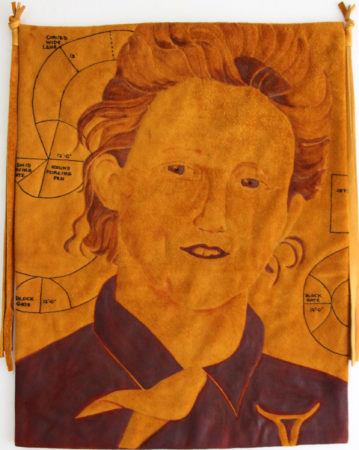 My sister’s husband, a pork producer, used to work with Temple Grandin, so she loaned me one of Temple’s books. Later, I saw the HBO movie about her life. I was so impressed with her abilities and accomplishments, despite struggling with autism.

Coincidentally, at the same time I decided to honor Temple Grandin in this project, I was given two large animal hides that a friend had purchased at a yard sale. I decided to make the quilt using the beautiful pumpkin colored leather. This was a leap of faith for me, but, inspired by this courageous woman, I learned what was necessary, bought some leather needles, and went for it!

The backing fabric – also a gift, was serendipitous as well. It is cloudlike animal shapes in a blue sky. Grandin thinks in pictures, and there is a scene in the movie where she is looking at clouds and imagining various objects.

Looking at many photos of Temple, I drew a paper pattern, then stitched through the paper, leather, batting and backing fabric. Stitching on leather turned out to be the same as stitching on any other quilting fabric. Why was I so apprehensive? After removing the paper, I painted and did some shading using oil paints, then added details using a laundry marker. The background shows some of the cattle handling systems that Grandin developed.

When the facing was added, the project was one inch too narrow for the requirements. To solve this problem, I added fringes on each side!

Temple Grandin, despite the handicap of autism, managed to earn a Bachelors, Masters and Doctoral degree, becoming a college professor, author, inventor, and consultant.