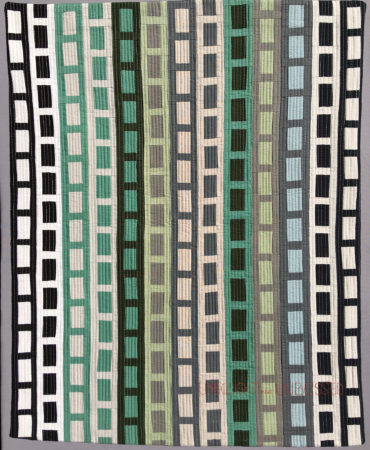 In 1971, a few days after my 14th birthday, I was arrested in front of the White House. That same day 300 people died in Vietnam. Influenced by Bella Abzug and Shirley Chisholm, I believed in their work for social justice – human rights, civil rights, women’s rights, LGBT rights – and took part in activities for social and political change.

During the same time period, I learned to sew, cook, turn wood, fix cars. My dream was to live in a home where everything was made by my own hands. This home would be in a community of peace and justice, respect and dignity. I wanted to do everything my father and brothers could do along with everything my mother and grandmother could do. I made my own clothes and quilts, wired my own lamp, bled the brakes on my car. I walked 19 miles with Abzug. I stood with Chisholm as she broke boundaries. I demonstrated, marched, spent the night in jail…and I quilted.

The inspiration for this quilt comes from the dress Shirley Chisholm wore in 1972 the day she announced her candidacy for the presidential primary. I chose the geometric pattern to highlight the legacy of these two women’s words. “Unbought and Unbossed” was Chisholm’s slogan in her run for presidential candidacy. This quilt is a tribute to Chisholm and her lasting influence in American politics.