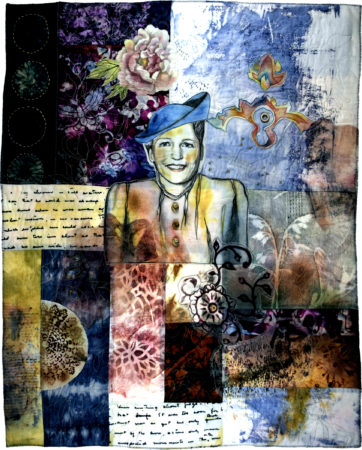 A Pearl of Great Value

I’ve tried to create a quilt as rich in layers and contrasts as Pearl S Buck herself. When I began the project, I knew I wanted to feature her likeness, but I also wanted to tell the story of her life, which was immersed in Far Eastern culture during her first forty years. I hand dyed and discharged fabric to invoke an Asian feel. I decided to create a balance between the opulent, colorful fabrics worn by the wealthy landowners Pearl wrote about, and the humbler, homespun material the fieldworkers she loved wore. Hand stitching is used for added textural interest and to give a worn, hand sewn look here.

I also have included in the mix some deconstructed screen print to give an ancient, timeless element because the culture portrayed in Pearl’s books had endured since antiquity. In contrast to this is her portrait as an independent, accomplished, educated woman of the twentieth century in a 1930’s coat and hat. I drew it in pencil and watercolor in my sketchbook, and copied it onto printer fabric, then appliqued it onto the center of the quilt.

In order to add depth and to tell the story more completely, I included a monoprinted swatch representing crops of grain grown by the peasants. The family in “The Good Earth” knew the value of the land from which life and sustenance came. I’ve overlaid a transparent silk screen print of a worker gathering the precious grain in her bowl.

Pearl S. Buck wrote brilliantly about China back in the era before Communism, winning both a Pulitzer and a Nobel prize.

I discharged, hand dyed and monoprinted fabric and pieced them together for the background. I then drew the portrait of Pearl and the peony in my sketchbook, copied them onto printer/fabric, and appliqued them onto the base. After that, I added hand painted and screen printed transparent overlays.