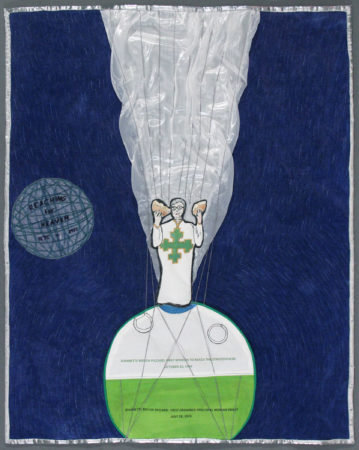 Around 1906, at age 11, Jeannette told her mother she wanted to be a priest. Her mother burst into tears and ran out of the room. At Bryn Mawr she wrote a paper exploring the possibility of women becoming Episcopal priests. It seemed unlikely at the time and she pursued a career in science. She married chemist Jean Felix Piccard, one of her instructors at University of Chicago, after completing her Master’s Degree. They moved to Jean’s native Switzerland, then to Boston where Jean taught at MIT.

Jean shared his twin brother Auguste’s interest in balloon ascension, and after Auguste had set several records and decided to remain in Europe, Jeannette and Jean began to seek funding for their own balloon flight in the United States. In October of 1934, with Jeannette at the controls and Jean recording data, the Piccards reached a height of 57,579 feet, almost 11 miles high. Although they did not set an altitude record, Jeannette became the first woman to enter the stratosphere–the lowest level of “space.”

They moved to Minneapolis, where Jean joined the University of Minnesota’s aeronautical engineering faculty and Jeannette earned a doctorate in education while raising their three sons and several foster children. Jean died in 1963; Jeannette then consulted for NASA, promoting the space program.

Jeannette became an Episcopal Deacon in 1971 and enrolled in Manhattan’s General Theological Seminary the next year, at age 77. In 1974 she was one of the “Philadelphia Eleven” women ordained priests in defiance of church doctrine. The group let her go first because she was the oldest and had waited the longest. The Episcopal General Convention officially recognized their ordination in 1977. Jeannette served churches in St. Paul until 1981 when she died of cancer at age 86. One of her granddaughters, the Rev. Kathryn Piccard, is an Episcopal priest today.