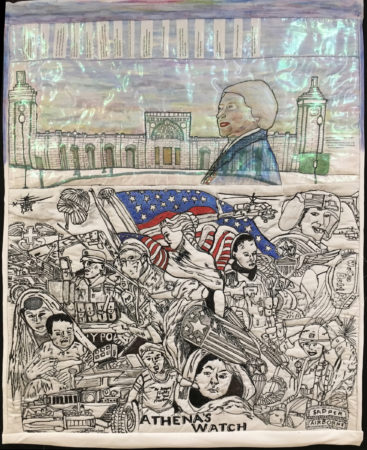 The Women in Military Service for America and General Wilma L. Vaught

Wilma Vaught joined the Air Force to lead, not just to serve. Although never a combat fighter, she served a full tour in Vietnam and was just a block away from bombs. She was outspoken and paved the way for the many successful women in uniform who followed her.

In every position she held throughout her career she was the first woman to hold the position. She was the first woman in a controller field to be promoted to the rank of Brigadier General. She continued to lead and support women after she retired. Her vision was to honor all of the American military women from the Revolutionary War to the present. She spent almost 12 years crusading to establish a memorial to honor women in the military services; her efforts led to the raising of over 20 million dollars.

My goal was to display her vision on this quilt. The quilt is in four parts. Across the top are Summary Tabs of the roles and major accomplishments of service women. Next, is a drawing of General Vault’s achievement – the Women in Military Service for America Memorial. This is followed by my copy of a drawing by Michael Solovey depicting today’s military fighting women. Overlaid onto the Memorial is my version of Annette Polan’s lovely portrait of the General Vaught. I selected sheer for the overlay to depict her vision drawing forth the Memorial.

One of the most decorated women in American Military history, responsible for establishment of the Women in Military Service for America Memorial, Arlington Cemetery.

Goal to create General Vaughts vision –so the quilt is in 4 parts, the Memorial and today’s military women.

1. The painting is today’s military women’s roles.
2. The Memorial building is Vaught’s desire to honor historical service.
3. The tabs are a summary of the history of women’s service.
4. General Vaught on sheer fabric… you can see through to the Memorial… it is her vision.

I drew the painting in pencil and then quilted it. I did the same on the Memorial. I drew the outline of Vaught and then painted her lightly. I used a projector and was able to get fairly clear images of the art, but not of the General or of the building. So I had to try to do my best.