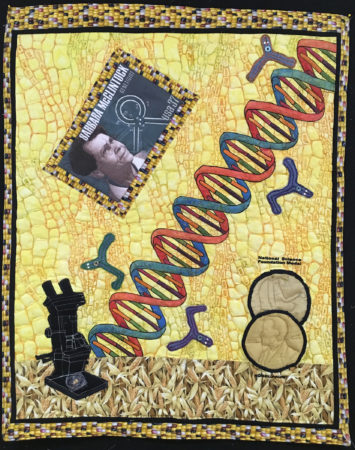 In my childhood I questioned why some corn ears were one color and others had multiple colors. In honoring geneticist Barbara McClintock with this quilt for HERstory I finally have my answer! Barbara was a pioneer in a male dominated profession. Barbara received degrees from Cornell at a time when women were not allowed to major in genetics. Therefore her Masters was in Cytology; the PHD in Botany.

Displaying early signs of genius, as professorial assistant she resolved a problem that her professor had been working on for years. After receiving multiple fellowships and performing research at various institutions she accepted a position at Carnegie Institution in New York. She traveled extensively collecting various maize samples and in 1948 she discovered transposition – jumping genes. When she presented her findings in 1951 other scientists did not understand nor recognize the importance of her work; as a result, she stopped publishing her findings.

However, in 1960 two male scientists discovered similar results and by the 1970s scientists began to recognize the importance of transposition elements (TE’s) in immunology and cancer. Today we know that 50 percent of the human genome is made up TE’s and they are a major force in evolution. In 1971 she received the National Medal of Science and in 1983 the first unshared Nobel Prize for Physiology or Medicine. In 2005 the US Post Office issued a stamp in her honor.

I found the perfect batik background fabric in my stash. It is yellow and the pattern looks like cells! This fabric became my stage for to introduce Barbara McClintock. I researched out microscopes of the 1940s and tried to draw one and make it in fabric and then I fused it to the background. I found a bead that looked to me like a maize kernel so I cut it in half and sealed it in plastic and attached it to the microscope.

I drew DNA, added trapunto, and painted it. I used my old jeans to make and fuse Jumping Genes around the DNA. I added a little humor by stitching “gumby” mouth beads and tiny beads for the eyes.

Happily I received permission from the US Post Office to add a copy of the 2005 stamp honoring McClintock. I made and copied in thread the details of both the National Science Award and the Nobel Prize and then used ribbon to outline them. I used fabric with corn on the cob and also maize kernels to further provide the viewer with the understanding that Barbara studied maize throughout her long scientific career. I used micron colored pens to make the corn on the cob fabric look like it is maize. I used my long arm and hand guided all the quilting.

Batik fabric background, Intense pencils and chalk, Micron pens, round beads for the mouth and seed beads for eyes, grosgrain 1/8th inch ribbon around the medals, 2 shades of gold silk fabric for the medals, 1 spotted bead cut in 1/2 and sewn into plastic and stitched to the microscope, photo fabric to copy the stamp