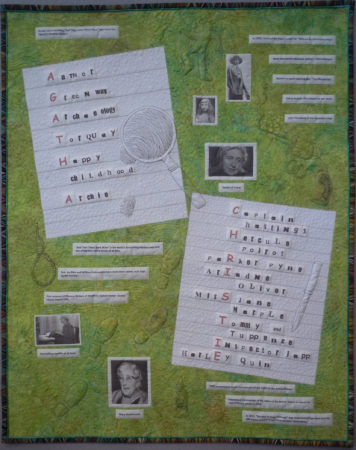 Agatha Christie: The Queen of Crime

Agatha Christie is one of my favorite authors with many accolades to her name.

This quilt was quite a process! Two years ago I made a similar quilt for a call for entries for “Notable Women”. I had included some copyrighted text on the piece. After several failed attempts to gain permission to use the text, the deadline for submission had passed.

When the call for entries went up for “HERstory”, I again decided to do another Agatha piece. This time I included only facts and pictures that were in the public domain. As I was about to do the final quilting on the piece, I measured and realized I had made it too long! This piece could easily be called, “Third Time’s the Charm”. Even so, it did not mean I knew the perfect way to construct this quilt. All three Agatha quilts were made a bit differently. Techniques used were inkjet print on fabric and machine quilting.

For me, this piece clearly defines Agatha Christie as the Queen of Crime. Done in ransom note form, the letters describe Agatha personally and identify her characters. Many of her accomplishments are included in text. Also included are pictures of Agatha throughout her life. Set on a “poison green” background, one needs to look for the clues in the quilting to see the murder mystery motifs.

Dame Agatha Christie is the world’s best-selling author of all time. Only the Bible and William Shakespeare have been more widely read.