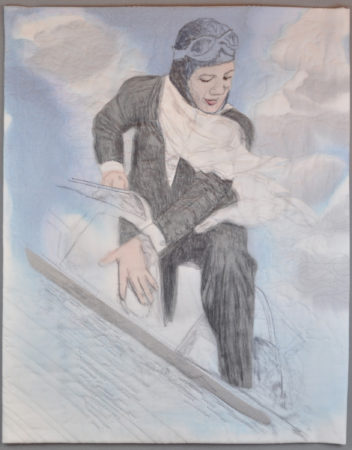 With the Wind and the Stars: Jacqueline Cochran

From obscurity and poverty, through the sound barrier, to the edge of space, Jacqueline Cochran was an aviation pioneer and undaunted advocate for women in military service. Jacqueline Cochran still holds more aviation records than anyone else, male or female, living or dead.

Inspired by Jacqueline’s intrepid soul, I have chosen to work in an experimental way with the materials and techniques of this piece. The silk organza layers are a salute to early aviators and the trademark silk scarves, used to protect their skin from chafing in the open cockpits.

This piece depicts a single pivotal moment where Jacqueline tastes victory for the first time. She departed Burbank, California at three o’clock in the morning, and flew non-stop for over eight hours to land in Cleveland, Ohio. She has just landed, taxied and parked her aircraft. (She pauses to apply fresh lipstick, as was her habit, being the CEO of an up-and-coming cosmetics company.) She is climbing out of the cockpit after a very physically demanding race.

What she doesn’t know, in this moment, is that she has won the 1938 Bendix Transcontinental Air Race.

As she accepted her victory, her plane was refueled and she returned to the air to fly to New Jersey setting a new West-to-East Transcontinental Speed Record two hours later. Since earning her license in 1932, she had captured the attention of the world with her bold confidence, and now she had captured the coveted Bendix Trophy as well.

Savvy, ambitious Jacqueline Cochran held more aviation records than anyone else. She was an aviation pioneer and an undaunted advocate for women in military service.