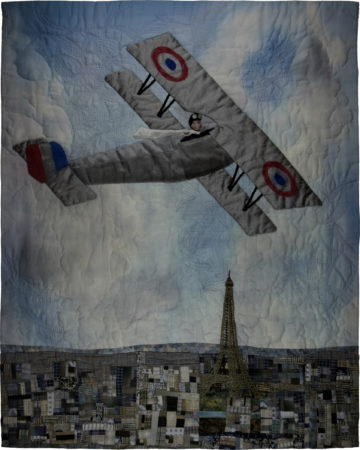 When no one in the United States would teach a woman of color to fly, Elizabeth “Bessie” Coleman learned to speak French, moved to Le Crotoy, France and earned her International Pilot’s License.

Bessie was one of thirteen children born to sharecroppers in Texas, descended of Native Americans and African American slaves. She struggled to earn an education while supporting her family picking cotton. College hopes were dashed by financial constraints and she quit after a single term to go back to work.

Her search for work took her from Waxahachie, Texas to Chicago, Illinois. While working as a manicurist in a barbershop, Bessie began to hear stories from soldiers returning from Europe after World War One. They spoke of France, flying and the opportunities enjoyed by French women.

Bessie enrolled in the Berlitz Language School to study French, and in 1921 she moved to France to attend Caudron Brothers School of Aviation. Seven months later she became the first African American to earn an international pilot’s license. She returned to the United States as “Queen Bess” the barnstorming stunt pilot. When she couldn’t fly, she gave lectures and inspired thousands.

On April 30, 1926, while riding as an observer to survey a site for the next day’s performance, Bessie was killed in a tragic aircraft accident. Although her dream of opening her own flight school, free of racism, was never realized, she inspired thousands of people, especially women and people of color, to pursue a career in aviation.

When nobody in America would teach a black woman to fly, Bessie Coleman learned to speak French, moved to France and earned her pilot’s license.