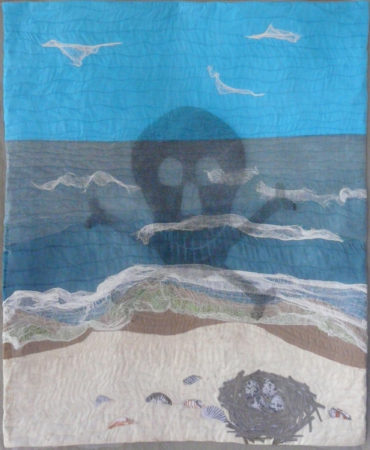 Marine Biologist, writer, naturalist, one of most influential people of 20th century.

An author of several books, and nature writer, Carson was the winner of National Book Award for The Sea Around Us. She wrote Silent Spring in 1962 as a warning about chemical pesticide and fertilize use. The book led to testimony before Congress and national television exposure in 1963. Carson was vilified by chemical industry and some in government for speaking out, but was ultimately proven correct when studies of dead wildlife found high concentrations of chemical pesticides.

Machine sewn. Overlaid with illusion netting. Overlay with 1960s ‘poison’ symbol is attached at the top, and floats over the piece.