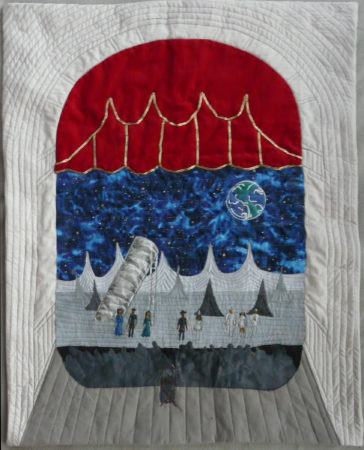 American opera conductor, musicologist, producer, impresario, international musical ambassador
Onstage at the Boston Opera House is Sarah Caldwell’s production of Le Voyage dans la Lune (Voyage to the Moon) by Jacques Offenbach. The Moon Princess and her delegation greet the visitors from Earth, while Maestra Caldwell makes the magic happen from her director’s chair. Based on written descriptions from Caldwell’s memoir.

Caldwell was the first woman to conduct at White House, USMC Band, Metropolitan Opera, and only the second woman to conduct the New York Philharmonic. She also founded the Opera Company of Boston. Caldwell was known for unusual presentations of standard works, innovative productions of challenging and difficult works; including traditional works in contemporary or different historical settings. She often went back to the original scores, and also presented new modern work.

As conductor and producer there, Caldwell established a reputation for innovation. Her pursuit of meaningful character interpretations and her concern for both musical quality and visual appeal drew to her productions many of the greatest opera singers of the time.