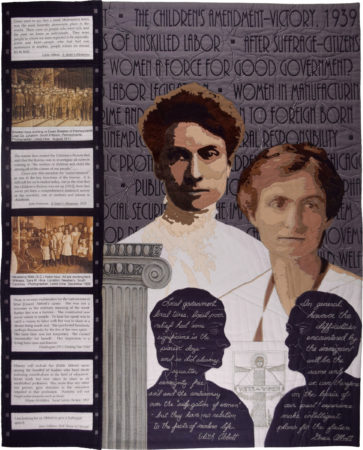 Sisters and Comrades Through All the Years

Edith and Grace Abbott grew up in my hometown, Grand Island, Nebraska. They were the daughters of a pioneer lawyer father and a Quaker, suffragist mother. The girls grew up believing in the power of the written word and they were advocates for people who did not have a voice: immigrants, women and children.

Grace and Edith championed the right for children to have the opportunity to enjoy their youth, unlike the children in the photos on the left. Edith became the first female chair of a graduate school in this nation at the School of Social Service, University of Chicago. Grace was the highest ranking female in the federal government during the Depression as the Director of the Children’s Bureau. They were a team throughout their lives.

Grace (on left) was two years younger than Edith. Grace was the persuasive speaker, Edith mastered the written word. Both women wrote books and articles presenting their views; a few of the titles are ‘carved in stone’ behind them. Their silhouettes represent the only photo that exists of them together. The figure between is from the title page of Edith’s first book.

The Abbott sisters believed in the treasure of the written word; their mother was on the Board that saw the Carnegie Library in Grand Island built. The column on the quilt is from that library whose building and contents inspired my appreciation for architecture and reading. Ninety-eight years after her birth, the Edith Abbott Memorial Library replaced the old library.

Edith Abbott was the first female chair of a graduate school in the US. She served as Dean of the School of Social Service at the University of Chicago from 1924 -1942.

Grace Abbott was the top female in federal government during Depression, serving as the chief of the US Children’s Bureau from 1921 – 1934.