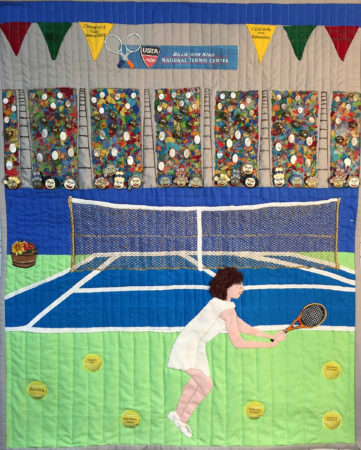 Being a tennis player all my life, it seemed fitting that I would honor Billie Jean King as an accomplished tennis player, as well as an advocate for gender equality. King won a record 20 career titles at Wimbledon – six singles, 10 women’s doubles, and four mixed doubles. When the open era began (1968,) King crusaded for equal prize money in the men’s and women’s games. In 1973, the US Open became the first major tournament to offer equal prize money for men and women. Other major tournaments followed suit. Even to this day, although tennis offers prize money equality more than any other major sport, the pay gap roughly matches that seen in American workplaces. So significant were her accomplishments that on August 28, 2006, the USTA National Tennis Center in Flushing Meadows-Corona Park was rededicated as the USTA Billie Jean King National Tennis Center.

I am not a portrait artist, so decided a beautiful “fantasy tennis court” with a side view of a tennis player would fit my style better. I originally wanted to dye resist some of King’s quotes on the court itself, but ended up with oversized tennis balls with short phrases that are attributed to her. The audience is created with chopped up bits of fabric, fused, then overlaid with tulle. One hundred and twelve beads were sewn on to represent faces. Her figure was appliquéd using the Appliquick™ method.

King is an advocate for gender equality– due to her efforts, prize money for men and women at many large tennis tournaments is equal.

The audience was created by chopping up pieces of cloth, adhering them with fusible web, then covering with a layer of tulle. The figure was created using Appliquick™ method of applique.