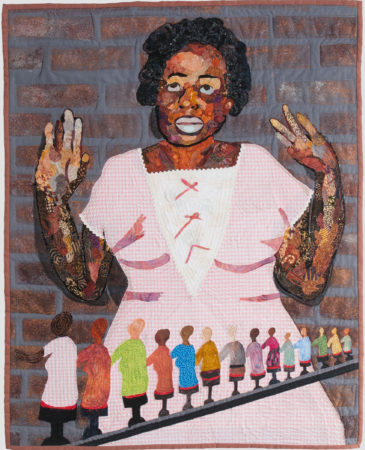 The courageous Fanny Lou Hamer was known as “The Spirit of the Civil Rights Movement.” The granddaughter of slaves, and the daughter of Mississippi sharecroppers, she vigorously challenged the values of the Jim Crow South, at great risk to herself and her family. In spite of brutal beatings and death threats, she persevered, registering thousands of southern blacks to vote, training Freedom Summer students, and joining the fight to integrate lunch counters, as portrayed in this quilt. She continued to fight for the rights of southern blacks and all citizens throughout her life, running for political office three times, and founding organizations to help the poor in rural Mississippi.

The inspiration for this quilt was an FBI photo of Fanny Lou Hamer, taken after she was brutally beaten while in prison for the crime of sitting at a lunch counter. Looking at the photo, I first noticed the sadness in her face. The second thing I focused on was the pink gingham dress she was wearing, adorned with bows and rick-rack. The contrast of the horrific crime of her beating and the innocence of her outfit struck me. I needed to portray the sadness in her face, the outfit, and the “crime” she was arrested for, sitting at a lunch counter in the Jim Crow South.

Fanny Lou Hamer, known as “The Spirit of the Civil Rights Movement,” risked her life demanding the right to vote in the Jim Crow South.

My method is fabric collage. I start with a sketch of my central image, and transfer that image onto heavy muslin. I arrange tiny pieces of fabric to create the image, and then glue them down. Then I cut out the central figure and glue it onto the background. In this case I hand-painted the brick wall. I created the lunch counter using raw-edge applique. My last step is to use free-motion quilting to unify the image. Shadows were created by hand-painting silk organza.