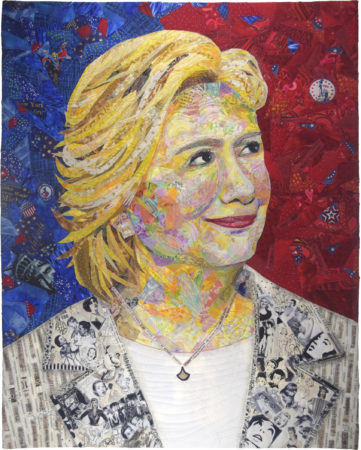 “It is with humility, determination, and boundless confidence in America’s promise that I accept your nomination for President of the United States!”

These were the words used by Hillary Rodham Clinton on July 28, 2016 in Philadelphia, Pennsylvania as she became the first woman nominated by a major U.S. political party. That evening she wore a white pantsuit in remembrance of the suffragists who fought to secure a woman’s right to vote with the ratification of the 19th Amendment in 1920. In my imagination, however, she was literally clothed in the spirits of many women, men, and children who have worked to create an America that values freedom and justice for all human beings. They were right there with her on the podium as she made her acceptance speech. If you look closely, you can see many people and other images in this quilt. You might find the White House, the Capitol, the names of every state, the statue of Liberty, a man playing a saxophone, and several other surprises.