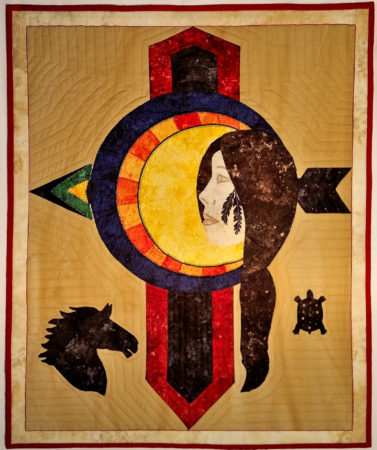 “A nation is not conquered until the hearts of its women are on the ground. Then it is done, no matter how brave its warriors nor how strong their weapons.” Cheyenne proverb.

It doesn’t get more inspiring than that. The wheel of life may be round but is not a perfect circle. The spokes that represent events which shape us are not of equal distance but are of equal importance in determining our destiny.

I have an affinity for Native American history and knew immediately I wanted to do a tribute to Mary Crow Dog. Mary was born on the Rosebud reservation in South Dakota in 1954 and passed away in 2013. Though she was part of the 1972 Trail of Tears event she really came of age participating in the FBI siege at Wounded Knee in 1973 and it was there her first child was born amidst the gunfire and violence. Her books and activism exposed the shameful collusion of the Bureau of Indian Affairs and the Catholic Church in attempting to annihilate tribal culture.

In 1991 her first book LAKOTA WOMAN garnered the American Book Award and a film followed in 1994. Her book OHITIKA WOMAN was published in 1993. The United States of American is indeed a great and proud nation and I continue to believe as a people united we can honorably acknowledge and address the less than noble deeds in our past.

Through Mary Crow Dog’s memoirs and AIM activism national attention was brought to the Native American struggle. She was indeed a woman of heart.

This quilt too is part of an ongoing learning process in applique. Still a novice with it but making progress. All applique was constructed with Stonehenge fabrics using both raw edge and turned techniques. There is some beadwork to accent the theme and miniature buttons were used on the tortoise. I used watercolor pencils to minimally draw her facial features from a composite of photos.