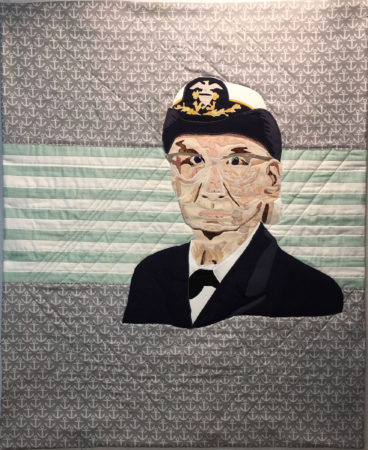 When Grace Murray Hopper was a young girl, she dismantled alarm clocks to try to figure out how they worked. Her parents encouraged her curiosity. Lucky for the computing world, they felt their girls should be taught just the same as the boys, for that young girl grew up to be a pioneer in computers, achieving such “firsts” as:

– writing the first compiler for a computer (1952)

– Being the first woman to have a building at a US military academy named after her when it was announced the US Naval Academy’s new cyber security building will be named Hopper Hall.

She was also a notable speaker and used to hand out pieces of electric wire to show how fast electricity travels in a nanosecond. The quilting on this piece is 11.8″ for each segment – the length of the wires she handed out. The green and white stripe evokes the computer paper I used to print my programs on, and the anchor fabric references her navy career.

Among many others, she was the first woman coder on the Harvard Mark I and she wrote the first computer compiler.