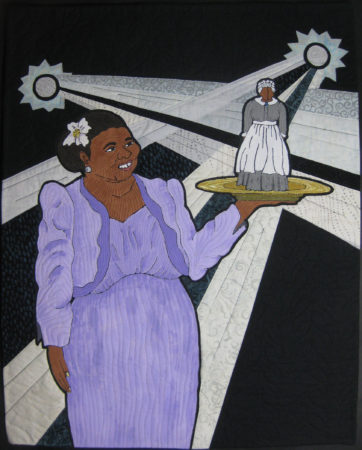 To Play One or To Be One, That is the Question! (Hattie McDaniel)

The year was 1940, the movie was Gone with the Wind, and the role was Mammy. Hattie McDaniel broke down barriers when she became the first African American person to be awarded an Academy Award in any category.

In this quilt honoring McDaniel, the spotlight is not only on her, but on the roles that she so frequently portrayed: that of a slave and maid. Hattie is wearing a suit in lavender, a color which represents something special or unique, and her hair is adorned with the same white gardenia that she wore when she accepted the prestigious award. In the background Aya, an Adinkra symbol that resembles the fern, has been quilted.

The fern, like Hattie, sometimes grows in harsh and difficult terrain, but still flourishes and survives. McDaniel had to endure tremendous prejudice and judgement throughout her career, and even after her death. Because she was a pillar of strength, she paved the way for people of color to be accepted and recognized in the radio, television and film industry.

Hattie McDaniel was the first African American to win an Academy Award, (Best Supporting Actress), for her role as “Mammy” in Gone with the Wind.