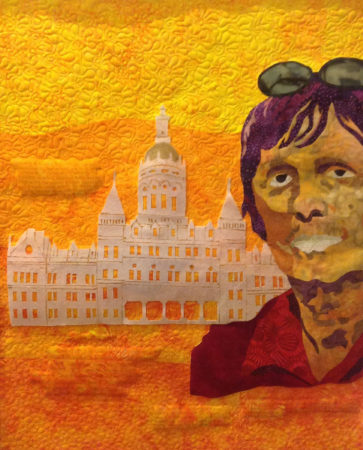 “If she (Grasso) gets the job she has her heart set on, Ella Grasso will have conquered the oldest bastion of male chauvinism in Connecticut: the governor’s office. Since 1639, that office has been totally oblivious to women’s liberation, its 335 – year history an unbroken succession of 83 male incumbents.”
– Connecticut Magazine

Ella Grasso was the Nation’s first woman to be elected to Governor in her own right, the 83rd Governor of Connecticut. She also held seats in the Connecticut General Assembly, the United States House of Representatives, and was the Connecticut Secretary of State.

” It is not enough to profess faith in the democratic process; we must do something about it.”
–Ella Grasso

I have a personal connection to Ella Grasso, a State Certificate with the Governor’s seal for being selected to represent my town in Connecticut’s re-dedication of The Old State House. This also entitled me to march in the parade for this event, marching just behind the Governor, I was in Grammar School. Her strength and accomplishments amazed me and I tried to capture that in the portrait. Quotes on the bottom represent some of what she overcame and on the top what she thought of women’s opportunity for progress.

The quilt includes fused batiks and fused and melted tulle. All quotes provided with permission from Susan Bysiewicz’s book, Ella, A Biography of Governor Ella Grasso.

Ella Grasso, the nations’s first woman to be elected governor in her own right. The 83rd Governor of Connecticut ending 335 years of male control of the seat (since 1639).