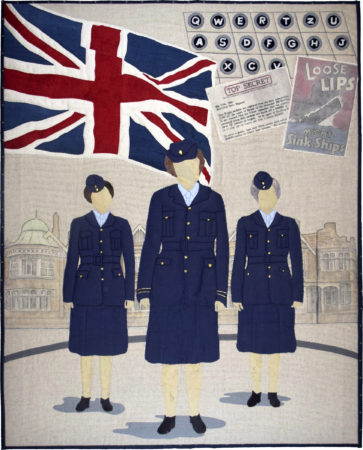 The more I learn about the Bletchley Girls and their impact on World War II, the more I want to delve into the historical detail.

I was inspired to tell this story as the mother of a good friend worked at Bletchley Park on the Colossus machine and I feel it is a story that must be kept alive and celebrated as an amazing part of history.
I chose to blatantly fly the Union Jack at the top of the quilt to express the patriotism felt by all those who worked tirelessly at Bletchley Park.

Alongside the flag I have shown the letters as they appeared on the Enigma machine (not exactly in the order of our more modern keyboards). This represents the codes and ciphers as they came from Enigma and similar machines from the German High Command, the morse codes intercepted across the country and relayed to Bletchley, the Colossus and earlier Bombe machines devised to decipher the codes.

The image of Bletchley Park sits as a backdrop, fittingly pale, as it is now more than 70 years since the end of the War.

And finally three Wrens represent the Bletchley Girls who worked in sometimes very difficult conditions to break the enemy codes, and thus shorten the War by two years. The faces are featureless – the Girls signed the Oath of Secrecy which meant that anything they were asked to do could never be spoken of to anyone – even their roommates and future families.

Sworn to secrecy, the Bletchley Girls helped change the course of history by cracking secret Nazi codes at Bletchley Park in the UK thereby shortening WWII by at least two years.