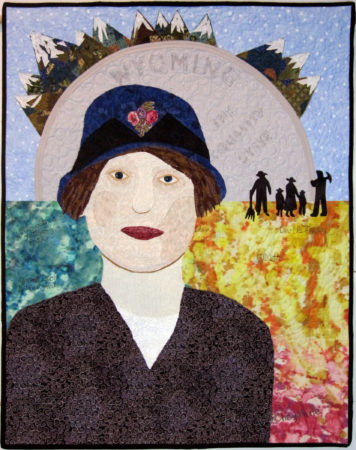 I was drawn to Nellie’s story as dutiful, yet ambitious, wife and mother. She was born in 1876 long before women could vote or dream of something other than taking care of home and family. While devastated when her husband William died, the opportunity opened up for her that was incredible for a woman in 1924.

Nellie reminded me of my mother Betty. Mom got degrees in home economics and later sociology – typical fields for women in the 1950s. I recently found Mom’s job applications which asked about husband and children – illegal questions now. She finally bumped into a pilot program for senior citizens, which turned into a career advocating for older adults. In her 50s, Mom unsuccessfully, yet later successfully, ran for state representative in North Carolina. Like Nellie, Mom turned opportunity into a career in public service.

I am fascinated by the people of Wyoming – The Equality State – who elected Nellie. As a territory, Wyoming gave women the right to vote in 1869 and women served on juries, as justices of the peace, and as court bailiffs as early as 1870.

To honor Nellie, Wyoming and it’s citizens and the U.S. Mint, I created a map of Wyoming in the lower portion. Nellie begins in the lower section and extends into the upper section where the Grand Tetons represent the ruggedness and beauty of Wyoming, a farmer, coal miner, and mother and children represent the citizens, and finally a coin represents the U. S. Mint.