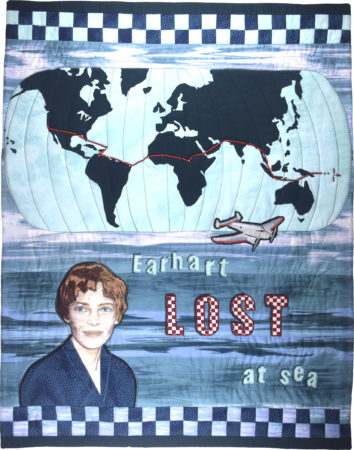 I chose Amelia Earhart for the HERstory project not only because of her fame as a woman aviator, but also because she had a connection to Wyoming, where I live. Amelia was a friend of my cousin’s mother, also an early female aviator.

The front of my piece shows the path Amelia took on her famous round the world flight. The flight path is depicted in beading and the fueling stops are shown with hot-fix crystals. On the back of the quilt are images of her times in Wyoming. The checkerboard pattern used in this quilt represents the sea and the many islands where she landed for fuel. It is now believed she died as a castaway on Nikumaroro Atoll.

While in Wyoming, Amelia stayed at the Double Dee Ranch owned by the Dunrud family in the mountains above Meeteetse. I have visited the Double Dee cabin which still stands. Amelia and her husband were having a new cabin built when her plane disappeared in 1937, and work on their cabin ceased.

It was a pleasure to work on this quilt in honor of Amelia Earhart. She is an inspiration to many for her sense of adventure and her ability to change the stereotype of what a woman could accomplish in the 1930s.

Amelia Earhart was the first woman to fly solo across the Atlantic, and the first to attempt to fly around the world.

This art quilt uses both traditional piecing and applique in it’s construction. The checkerboard piecing represents the mix of ocean and islands, as Amelia made her way around the globe. The world map showing her flight path progress was made as a separate piece and added last.

Hand-dyed and commercial fabrics were used in this piece. Beading and hot-fix crystals depict Amelia’s famous flight path around the world. The back of the piece includes a photo transfer of her cabin at the Double Dee ranch in Wyoming. A photoshop sketch of Amelia was thread-sketched, while her hair and the airplane were thread-painted to add texture and interest.