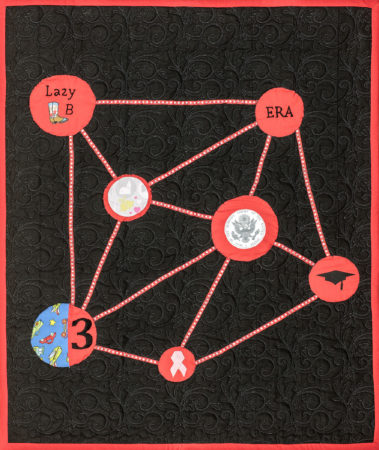 Sandra Day O’Connor: A Woman for All Seasons

As Sandra Day O’Connor once observed, “The secret to a happy life is work worth doing.” We have both enjoyed lives of public service: she as a jurist represented by the pleated black background and me as a public educator. This quilt weaves together the various roles of her life: daughter, wife, mother, breast cancer survivor, women’s advocate, Supreme Court justice, and college chancellor.

The seven yoyos and the four yards of ribbon are red to symbolize O’Connor’s Republican leanings. All fabrics are commercial and are primarily appliquéd or fused. Shelly Nolte long arm quilted the piece using Touch of Fall by Anne Bright.

In 1981, O’Connor became the first woman appointed to the Supreme Court. After 24 years of service on the court, Justice O’Connor retired to care for her husband of 57 years until his death in 2009. She then served as Chancellor of William & Mary college. She believes that “…whatever happens is the result of the whole tapestry of one’s life and all the weaving of individual threads from one to another that create something.”

Sandra Day O’Connor was the first female appointed to the Supreme Court.

Yoyo making, applique, fusing and embroidery were used in the construction of this quilt. The seal for the Supreme Court was transferred to fabric.

Commercial fabric and ribbon were used.