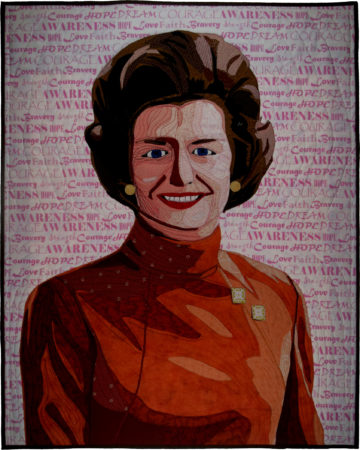 First Lady Betty Ford was a remarkable woman whose most significant accomplishments all happened holding a microphone. When I heard on the news that she had admitted that she was an alcoholic and was going to seek treatment, I was so impressed with her bravery. Her courage in discussing a subject formerly taboo would bring light to the challenges of addiction and refute the view that it was a moral failure confined to the lower classes. Here was a beautiful, successful, accomplished, gracious, famous wife and mother who had a problem with drink and drugs and was determined to kick the habit.

Later, she got breast cancer and was the first famous American to discuss that illness openly. The pink October movement was her idea. Having lost my mother and several friends to breast cancer, I have a personal appreciation for Ford’s efforts. Her encouragement to get mammograms has saved many lives already.

Lobbying for the Equal Rights Amendment was another of her causes. Having been a successful businesswoman and then doing a lot political and charity work as First Lady, yet also raising four children, she had enough experience to understand the importance of equal pay for equal work.

With boldness, honesty, wisdom, and compassion, she used her prominent position to speak out on a variety of issues, raising awareness and giving hope to millions. This quilted portrait is my tribute to a wonderful role model, Brave Betty.

Betty Ford, wife of President Gerald Ford and First Lady of the US from 1974 to 1977, was the first prominent public figure to bravely admit her alcoholism, drug addiction, and breast cancer, giving hope to millions.