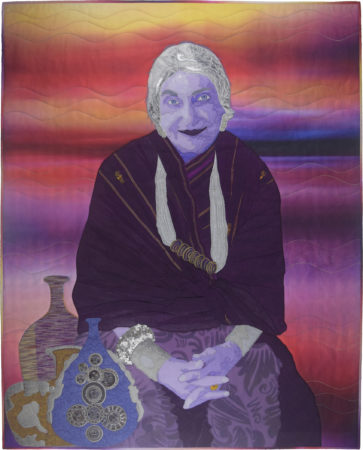 The fact that Beatrice Wood lived to 105 years and created art till the end of her days is not the only extraordinary thing about her. Born in the late 19th century, a time when women’s roles were rigidly defined, she was the first female accepted into the avant-garde art movement, as well as being muse to two of its most famous members. While she only began to study ceramics in her 40s, she ultimately became a renowned potter, know for innovating iridescent glazes.

I first encountered Beatrice Wood in my university’s bookstore. Returning to college at 31, I was well aware of the age difference between my classmates and myself. I delighted in finding her autobiography, “I Shock Myself”, written in 1983 when Beatrice was 80. Here was an elderly woman who joyfully celebrated creative living and embraced her age. And her clothes! She dressed exclusively in Indian saris and Native American jewelry for the last several decades of her life. Even sitting at her potter’s wheel, her sari was protected from the clay by an apron, and her jewelry was on display.

Beatrice was a multi-faceted artist. An actress in her youth, she learned to draw, paint and sculpt, but pottery was her lasting joy. Pottery was considered a lesser art, a craft, and she didn’t attain recognition as a fine artist till late in life. As a fiber artist, I understand this perception. I celebrate Beatrice Wood as a woman determined to make and share her art!

Beatrice Wood was the first woman accepted into the avant-garde art movement. She was nicknamed “The Mama of Dada.” She lived to be 105. Joyfully.