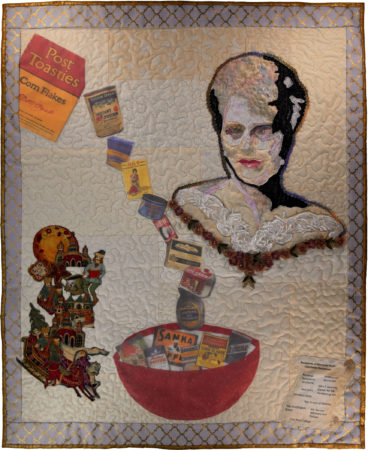 Marjorie Post was a diverse, multi-faceted individual who was an accomplished businesswoman, socialite, philanthropist, and collector. Marjorie became owner of The General Foods Corporation, after her father’s untimely death in the early 1900s. By 1936, she was on the Board of Directors of General Foods, a unique position for a woman in the 1930s. General Foods includes a massive group of products today; the historical photos of the products in the background were the initial companies that built General Foods.

This quilt is an artistic depiction showing the corporation growing out of a single product, Post Toasties, her father’s brainchild. The patchwork muslin background symbolizes her humble beginnings. The original cereal box, represents the building block of the corporation. The products are covered by organza to show that General Foods was the mainstay of her lifestyle and a significant foundation. She made an impact on the food industry second to none, but her legacy resides in the things she did with the wealth she acquired through this successful company.

Mrs. Post was intensely private with her philanthropic deeds, which accounted for millions of dollars of charitable donations; in many cases, the recipients had no idea of their benefactor. Marjorie’s image, along with the scroll noting the recipients of some of her generous donations are shown in the forefront, as well as images representing the extraordinary French and Russian art collection she assembled which is displayed at Hillwood Estate Museum in Washington, D.C., her most treasured legacy.

Marjorie Merriweather Post, heir to the Postum Cereal Company, and Owner of General Foods Corporation, philanthropist, socialite, and collector, was a woman before her time.

Background of the quilt is a patchwork of muslin. The image of Ms Post was done separately with many layers of fabrics to depict shadows and give the face an impressionist look. The Russian accents were cut and fused then quilted. The products (which are historical photos of the products from the early 1900’s) were printed on fabic, cut out and fused to the background. The organza covering the products is to give the illusion of them being in the background of her life, her foundation. The lace accents on her dress were to emphasize her style and stature as a Washington socialite.

Quilt is constructed of cotton fabrics with lace accents and trim. Organza covers the products which are fused on, tulle covers part of the face and hair, and quilting is done over the entire quilt. Light cotton batting is inside; the quilt is trimmed with gold binding.