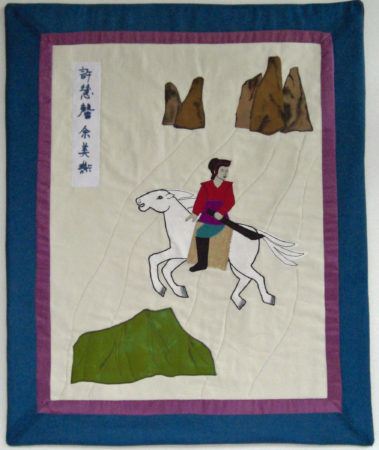 As a young woman, I was the only American of Chinese ancestry in a small New York town. My aunt, after hearing Kingston speak, sent me The Woman Warrior. Although my experience growing up in Hawai’i was different from Kingston’s, her stories and experience resonate with me. I, too, am an American of Chinese Ancestry. I, too, lived in Hawai’i. I, too, would marry a Caucasian and raise biracial children.

Caucasian people often told me that I spoke English well (I am a 4th and 5th generation American). People are still surprised by my appearance and non-Chinese married last name. Kingston’s description of navigating between cultures, of being a part of two cultures gave recognition to the minority experience. I am drawn to the woman warrior, a woman who exemplified strength, resilience, rebellion and leadership. I have raised strong daughters. As a middle aged woman, I went to law school. In my mid-60s, I became a quilter.

My quilt is laid out like a traditional Chinese scroll. Like a scroll, my quilt has borders which frame spare and suggestive imagery. The mountains in the background represent China; the woman warrior looks back at tradition while riding forward to the Gold Mountain. Commentary and names of owners as the scroll is passed down through generations are often written along the sides. When I asked my 93 year old mother if I was writing my name in characters correctly, she took brush in hand and calligraphed her name and mine. I included her calligraphy on the quilt.