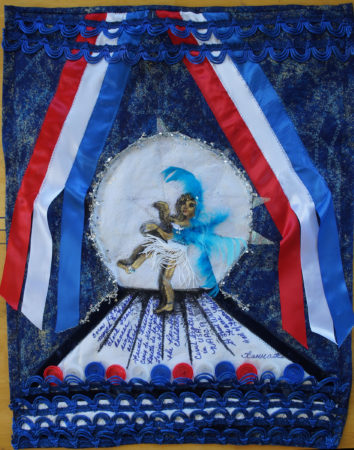 Josephine Baker, exotic dancer called the “Black Pearl”, met the challenges of poverty and desertion by her father in her youth, racism and segregation, Nazi invasion while in France, and rejection as a performer by the public in the United States by using her beauty, dancing talent, and intelligence.

I admire the way in which she placed the safety and welfare of others above her own, i.e., French Resistance and March on Washington with Martin Luther King Jr. I respect that she achieved success (at times fleeting) and did not lose sight of her ideals and goals. For a poor Black woman in the early 1900s she rose to unimaginable heights–on two continents! I am delighted to have the opportunity to create this quilt commemorating the achievements of an amazing woman.

In the quilt, a scantily clad dancer is seen on stage. Initially, she wore only a fringed skirt, but on second thought, I included a bra. Note the iridescent star surrounding her body. The star and dancer are encircled by the spotlight and peripheral stars. The stage boards contain her history. The audience is composed of red and white (integrated) heads sitting on blue chairs. The theme of red, blue, and white pervade the quilt signifying the French and United States flags.

Josephine Baker, exotic dancer, participated in the French Resistance/Free French Forces in WWII and in the U.S. Civil Rights Movement/March on Washington.