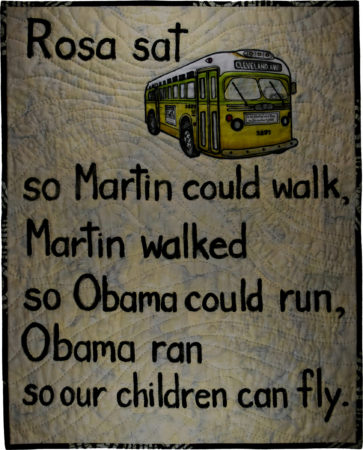 It All Started on a Bus: Rosa Parks

I wanted to pay tribute to Rosa Parks’ courageous action on that crowded Montgomery, Alabama bus in 1955. Her subsequent arrest sparked the citywide Montgomery Bus Boycott and initiated social action throughout the United States. The words on my quilt were written by Kiari Day in 2008, on a bedsheet banner for Barack Obama’s first Presidential campaign. Ms. Day rightfully credits Rosa Parks with being the person on whose shoulders Martin and Obama stood. Her “poem” was incorporated into a rap song by Jay-Z and quoted by Hillary Clinton at a 2016 campaign concert in Cleveland, Ohio.

Hand-embroidered between the quilting lines are two famous quotations: “Nah”, and “The only tired I was, was tired of giving in”; also the titles bestowed on Rosa by the United States Congress, “First Lady of Civil Rights” and “Mother of the Freedom Movement.”

Rosa Parks ignited the Civil Rights movement in the United States by refusing to surrender her seat on an Alabama bus on December 1, 1955.