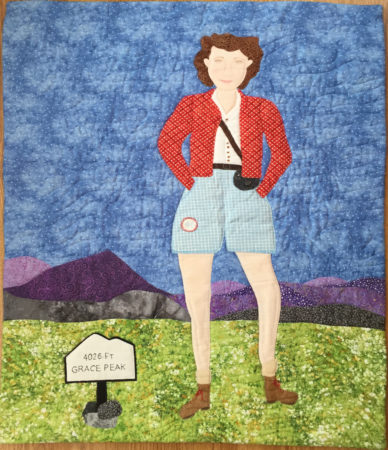 In 1906 there were 45 stars on the United States’ flag and women could not vote. That year Grace Hudowalski was born in Ticonderoga, New York. She spent her childhood in the shadows of the Adirondack Mountains. Grace developed a lifelong love affair with those mountains that began on August 2,1922 when she climbed to the peak of Mt. Marcy, the state’s highest. “…that did something to me.  I had seen something. I felt it. I never forgot that mountain and I never forgot that trip.”

Grace married Ed Hudowalski in 1926 and the two of them became champions of the Adirondacks and climbing their 46 peaks. They led Sunday school climbing trips to encourage children to get outdoors. Grace was a founding member of the “46er Club,” who were people attempting to climb all 46 peaks. She advocated for the mountains and their protection. “I never talked about anything, but mountains. I talked about them, I wrote about them. I gave speeches about them.”

Grace achieved her goal of climbing all 46 peaks on August 26, 1937 when she reached the summit of Mt. Esther. She was wearing her favorite shorts which she wore while climbing each peak. She was one of nine people and the first woman to climb all 46.

Until her death in 2004, Grace encouraged women to experience the outdoors. “It’s good to get outdoors, to get lots of fresh air to bring color to your cheeks and zest to your step.”

Grace Hudowalski became the 9th person and first woman to scale all 46 peaks of the Adirondack Mountains.