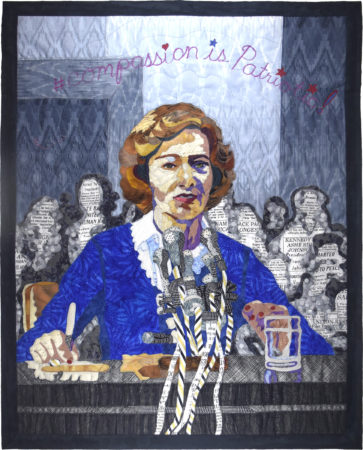 Rosalynn Carter Explains to the Senate

Rosalynn Carter was more than just a First Lady, she was an activist who broke tradition and used her position to speak out for those who had no voice.

This image (provided by Mrs. Carter) shows her testifying to a Senate committee on behalf of the 1980 Mental Health System Bill. She was only the 2nd First Lady to appear before Congress. Mental Health issues were her highest priority, and she worked to change the nature of government assistance to the mentally ill, to help remove the stigma so those affected could admit to their disability and seek help, without being labeled as “crazy”. For those of us who have sought therapy for PTSD, abuse, grief, depression or similar challenges, our ability to seek this help freely today, is built on the foundation of Rosalynn Carter’s passion for this issue.

After holding the office of First Lady for 2 years, Time magazine called her the “second most powerful person in the United States”. Rosalynn did not consider it her major role to entertain at the White House. She was pleased that some considered her a demanding First Lady, not being confined to official hostess or other demeaning roles.

One year after leaving the White House, Rosalynn Carter co-founded The Carter Center. She is on the center’s Board of Trustees, and is the chair of the Carter Center Mental Health Task Force.

At the end of this exhibit, this quilt will be presented to Rosalynn Carter as a donation to The Carter Center. www.cartercenter.org

Rosalynn Carter stepped out from behind her famous husband, President Jimmy Carter, to crack open the country’s expectations of what a First Lady could do and be.