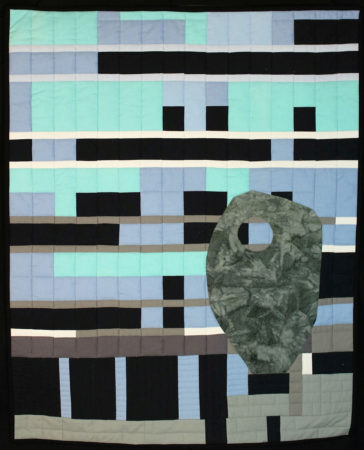 Andy and Jim began quilting some years ago when Jim as a part of his 1996 Masters’ thesis project worked on the construction of a cottage industry to a corporate concern. Now retired bankers, they try to spend as much time as possible creating and experimenting with quilt designs, fabrics, their machines, and thread.

Jim’s degrees include Bachelors in Education and a Masters in Organizational Management. Andy’s degree is the area of Textile Engineering. Both worked on Masters of Business Administration.

Andy and Jim try to create, design, borrow, and beg their ideas from the past, the present, from those artists much more experienced, and at times from that which takes their fancy. im is constantly saying that he now understands why he took so many trigonometry and analytical geometry classes in the past. Their style of quilting is considered a mélange of Traditional, Contemporary, Artistic, and Modern.

Andy and Jim create their regard for Barbara Hepworth’s work in their fabric reproduction and adaptation of her work, Simple Form, as it stands in its solitary position of strength in the plaza in front of the United Nations building. Their quilt, composed of 100% cotton attempts to associate Hepworth’s style. They have attempted to juxtapose the curvilinear and fluid movement of Hepworth’s Single Form as it so blatantly stands in memorial in front of the parallel and structured lines of the windows of the building and the organization of the United Nations.

Dame Jocelyn Barbara Hepworth DBE was an English artist and sculptor. Her work exemplifies Modernism and in particular modern sculpture.

Barbara Hepworth – A Single Form – is a pieced quilt in the form of a mosaic using squares and rectangles and applique techniques.