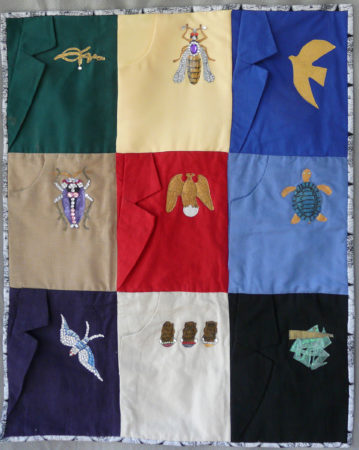 Serpent: While US Ambassador to UN, Albright criticized Saddam Hussein for his refusal to go along with the deal. A poem was published by Iraqi press calling her a serpent. When she had to meet with Iraqi officials, she wore her serpent brooch.

Bee: Worn to make a point to Yasser Arafat, that the US would try to negotiate peacefully, but if pushed, might be forced to sting.

Bug: How do you tell the Russians you know they are bugging your conference room without disrupting your relationship? Inspired by Iradj Moini original.

Eagle: Worn when nominated to be the first female Secretary of State, 1996. Inspired by Ann Hand original.

Turtle: Worn when negotiations were proceeding at a slow, frustrating pace.

Monkeys: Worn to a meeting with Vladimir Putin, to discuss Chechnya and human rights. Putin claimed rights were not being violated, and neutral monitoring was unnecessary. Albright thought otherwise. Inspired by Iradj Moini original.