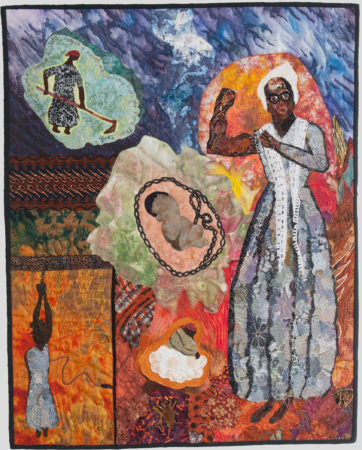 During the Passover Seder celebration at my home, the third cup of wine is held up for “A world with equality for women.” Before the kiddush we read about Sojourner Truth and her famous “Ain’t I a Woman” speech. After doing this for 29 years, while doing research for this quilt, I learned of the controversy surrounding this speech. The more I read, the more I realized that Sojourner Truth most likely never uttered the words “Ain’t I A Woman.” She did, however, give a powerful speech arguing for equality for women.

In this quilt I include images from both Marcus Robinson and Frances Gage’s version of the speech. Robinson’s probably being more accurate, and Gage’s being more visual. Both speeches refer to her muscular body and her strength, her having plowed and planted. Where Gage’s version goes astray was in retelling the speech in Southern dialect, while Truth grew up in New York and was known to speak proper English. The image of thirteen children most all being sold off into slavery was clearly an exaggeration. Sojourner had 5 children and one was illegally sold to the South around the time of Northern Emancipation. Truth took legal measures to bring him home.

Sojourner Truth was 6 feet tall. I portray her as the central figure, surrounded by the images from her speech. I chose to use text from the more accurate Robinson speech, and include only one baby sold off into slavery.

Sojourner Truth, an abolitionist and early women’s rights activist, was the first black woman to succeed in challenging a white man in a US court.

My method is fabric collage. I start with a sketch of my central figure, and transfer that image onto heavy muslin. I arrange tiny pieces of fabric to create the image, and then glue them down. Then I cut out the central figure and glue it onto the background. In this case, I had 4 peripheral figures, done using raw-edge applique. For the image of her hanging in the barn, the dress was done with the fabric-collage technique described above. The baby’s chains were painted on with Inktense Blocks and then stitched over with free-motion quilting. The text was done with free-motion quilting. My last step is to use free-motion quilting to unify the images and the background.