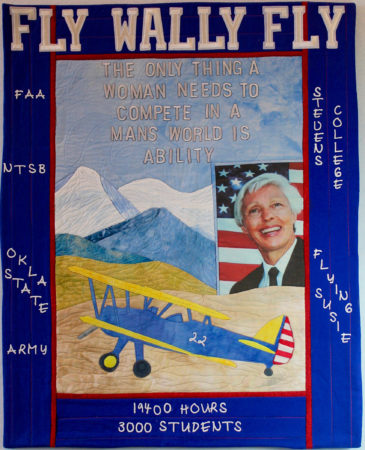 Volunteering at the WASP Homecoming last year, I first learned of and then met Wally Funk. I was intrigued and knew my contribution to HERstory would be about her. She has been a ground breaker all her life, earning her pilot’s license at an early age, competing in varied activities, and then undergoing testing, hoping to become an astronaut. NASA said “no women need apply” and Wally moved on to become the first female with the FAA, the first woman Inspector for the National Transportation Safety Board, Chief Pilot for several aviation schools and captain for several small commercial airlines. She totals over 19,400 hours of flight time and has taught over 3000 students.

I had the privilege of visiting Wally Funk in her home, hearing her stories and viewing her special treasures. She selected the photo for the quilt, which set my color scheme. Her upbringing in Taos, New Mexico, gave her a spiritual connection to Taos Mountain. Her first plane was the Stearman. Her attitude of “Go For It” is a good model for the rest of us.

All of this is important to me as a woman, but also as a grandmother. My oldest granddaughter just entered the Aerospace engineering program at the University of Texas!

Wally Funk, as one of the Mercury 13, forced the country to realize that women are capable of much more than previously thought.